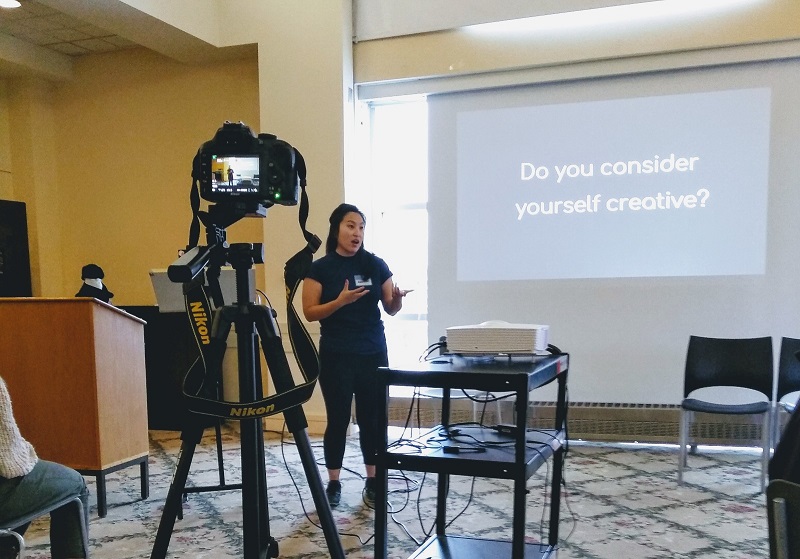 My name is Amanda my pronoun is they/them and I am going to talk to you today about creativity and mental health.

Out of curiosity, who considers themselves creative?

So the reason I ask, is cuz I believe that everyone is creative and I also think that creativity and problem solving can go hand in hand.

So just to share about myself, my background is when I was really young I really enjoyed arts and crafts. That was my thing. And part of my identity was doing arts.

To the point where I had the privilege of going to school to study film theory and was really interested in why someone chose certain things, did certain things in their craft. So then because of that I found a job in the same field, you know wanted to make arts a living and what happen was I ended up really focused on my work life. My art identity dissipated, it just became a hobby. It wasn’t a part of my identity anymore and I kinda lost sight of that. And what happened was at that point the future became really hopeless. I didn’t see a reason to continue. I didn’t have anything that excited me to get up in the morning and get going. And as a result, I saw myself in a different way. I wouldn’t, I would take more naps, could not want to do the things that I used to like go out, see friends, there was even a point where I would wake up in the morning and would hope I would get a sore throat just so I can call in sick. And that was every single day. And that’s not something typical of who I am. So someone suggested like hey maybe you should get checked out. So I went to get checked out I went to CAMH emergency and diagnosed me with depression and anxiety. I went through the therapy group they had and the nurse suggested that I look into visual arts again and crafting.I was like oh god I don’t want to do a project, I don’t want to start something, I don’t want to finish something. I couldn’t imagine that whole process. And so they said its not about finishing or starting, its just looking at it. So I took out my box of stuff, I looked at the paint, looked at my washi tape and my ribbon and took out the paint brush, I just rubbed my fingers over the bristles and something in me just got ignited. And that’s when I recognized that its not about what I create but its how I feel when I do it.

Creativity isn’t about making something. It’s about the emotional process you go through that creates the connection to oneself.

When you create something, out of nothing that you made whether that’s something physical or not it says something about who you are than what you create.

And finding that person in you, figuring out who that is, is not easy. It’s really challenging to figure out who you are in the making. And this is where I share a few things I learned. I am so interested in creativity I finally got into that groove of what is creativity and how can it help my mental health that I looked to media theorists, sociologists and psychologists. You’re going to see a few of their words, that I found, that I really see that connection. So when I was making this presentation, it was not easy because I what no frame work in mind. Yes I know words come out of my mouth, I stand and speak. I know that part but creating this powerpoint presentation it was a blank sheet. You’ve done presentations in school, you know what its like. It’s a blank slate. and to create something that didn’t exist before takes a lot out of you. I went to some advocates, mental health advocates in my community and said, hey what do you think, what do you suggest? People gave me their points of view and when I came down to realizing is that its my process. Its how I choose to do something. And how I chose to do this was I created two drafts of what is not this presentation. Scrapped it and then recreated another one. Because in that process of making I realized it wasn’t what I wanted to say. So even in the figuring it out I still had to start over, recreate and do all those kinds of things. And so, what I wanted to share with you. Virgina Satir researched where she discovered that there are 250 ways to wash dishes. I thought this was an astounding number because I didn’t think there 250 ways to wash dishes and it depends on whose doing them and the ingredients and all those things but the point is that there are more ways than the ways one would think there is to do something. So the idea there is that it fluctuates, change and all in your power.

The beating heart of creativity lies in the process of making rather than the product of that making.

So its how you create something not necessarily the outcome.
How we see things. What’s really neat about where you are right now is that I am standing here. I’m not, the focal point doesn’t really change but where you all sitting and the view point which you see me is very different even from the person beside you. Whether it be the way the light hits where you’re sitting or the way that youre thinking about what I am saying to you that perspective is different. So when it comes to perspective I always thought it was physical but its also mental. Its how I think of it that makes it so different. I want to share with you this artist Paul Heaston. I really love his drawings, I found it so fascinating that he decided to choose this point of view. This vantage point from which he drew this, where he was sitting in this cafe. If you’re interested, that’s his Instagram (@paulheaston) all of his drawings come from that view point of his work, what’s in front of him.

Creative people see farther and wider, their cognitive peripheral vision is clearer they make connections between seemingly disparate things that many of us miss.

So the scope in which we see things differ.

CreateBeing has a call for submissions, I encourage you to submit your story. What we do here we want to share this project so people have a platform for their voice. This is where you get to share your mental health story about mental illness, addictions, anything like that, you get to have a voice and we share. The point here is to create community to end the stigma.

Creative individuals are remarkable for their ability to adapt to almost any situation and to make with whatever is at hand to reach their goals.

So no matter whatever point you are you can keep going or start over. Notice that the main foundation here is that you continue. So what is really neat is that if you start a project like a year ago, lets say if you started an embroidery project and you put it down for whatever reason, maybe five years down the road you start visual art, let’s say you start painting. That first start of embroidery may have ignited something in you that made you connect the two together. It may not seem like they are but the fact that you started something creative could have lead you somewhere. And be that known that could be anything in life, it doesn’t have to be a creative endeavor. It could be you started a job and you started working on folding clothes at a clothing department but all of a sudden, a month later you decide you want to start your own business there’s something in the links of your experience.

And know that have your resources you have things around you to make something out of nothing and this is perfect we have pizza here today, you one element already, the idea here that you make something with the things that you have and thats from even your own experiences.

So in that way, comes back who you are. In that vantage point is you and how you see the world. So when I was making this presentation I was trying to make it minimal and black background and have white text and then I realized, I am not a minimal person. I love colour, I don’t know if you can tell I am really animated, its just not who I am. So why would I not put that in this presentation. So you can see who I am. This is the perspective I want to show you.

Creativity is the process of bringing something new into being.

I love this line and actually was the quote that ignited my business and what I see here is that I have the power to create who I am. Because I’m in this place right now. I have a blank canvas and I get to put whatever I want on it. I can splash paint on it, I can glue stuff on it. It’s mine. It’s what I want to create.
And when I was diagnosed with depression and anxiety it was something realized I had my whole life I just wasn’t told that it was called this. And it really came out and really saw it and I realized there were only three things that I was willing to do or that I had energy to do. Go to the bathroom, take naps, make ramen. That was it. I had no energy to do anything else and before this diagnosis I would say I was a timid person, I let people speak for me, I let things just ride. And because there’s only so much energy that I could give even adding brushing my teeth, showering, those things took time and I knew at that point that there’s only so much energy I only have to show up. so it really ignited my living.
Does anybody know this reference?
Get me to the Greek
So, I’m a movie person.

Community is really key here. It’s not just about having people around you and being able to share your experiences. It’s about the connecting of making things as well. When we share things that we make online or in person it gives us a different way to ignite that inspiration to create.

It is through the doing and making things that we develop a sense of ourselves as purposeful and inventive, bringing something forth and participating in the world.
We get to make, get to be a part of this community.

So my partner and I created CreateBeing. We run workshops that focus on creativity and mental health. Really its to bring people together, end stigma and really ignite creative expression.

And I want to encourage you to reach out and share your creative endeavors. Maybe its not physically making something but sharing knowledge, maybe you want to create a video about making pizza or braiding your hair, making jewellery or it could be just a lesson you want to share with the world. Whatever that is that connection can actually inspire somebody else to do something. Maybe you are making scarves and somebody else sees you’re making scarves and do the same or they’re like hey this person actually made something I think I’m going to create a new song, a remix, whatever that still ignited something.

So I encourage you to follow us online and email me, let me know what you think we have workshops, we’d love to see you there.